Here's a conversation with a former ATF official, Rick Vasquez, discussing the upcoming regulations that were encouraged by Trump and the NRA and how we get on this train to banning all semi-auto firearms.


This excerpt highlights the most dangerous parts of the ATF's plans to write a new regulation that carries the weight of law. This regulation can potentially bring about Canadian style anti-gun laws without an act of Congress. This is the greatest threat we've faced to our 2nd Amendment rights, ever. Please act now. The ATF is attempting to circumvent the authority of Congress by creating a regulation to ban the rate of fire of any semi-automatic even without a bump stock or ECHO trigger.

Pay attention, we could all learn from what Vasquez says.
“A free people claim their rights, as derived from the laws of nature, and not as the gift of their chief magistrate.”
-Thomas Jefferson, 1774

NO, even your bolt action rifle with a supposed ''tuned'' trigger is suspect

Modded up your lowly Ruger 10/22 ?
Acquisitions so far:

Gun control advocates have called for prohibiting possession of AR-15 rifles — a ban that could create five million new felons overnight, since most owners would not meekly surrender their firearms at the nearest federal office. Others advocate outlawing all semi-automatic firearms — an edict first floated by the Clinton administration that would create tens of millions of new offenders.

But before vesting vast new power in federal enforcers, the record of the Alcohol, Tobacco and Firearms (ATF) agency must be considered. A 1982 Senate Subcommittee on the Constitution report on ATF concluded, "Enforcement tactics made possible by current firearms laws are constitutionally, legally, and practically reprehensible.” Outrageous abuses have continued to the present day. An analysis conducted for the University of Chicago found that ATF heavily targeted racial minorities in its entrapment operations. And across the nation, ATF has been caught using mentally handicapped individuals in sting operations.

Sweeping new firearms prohibitions would enable the feds to selectively target unpopular offenders. The biggest debacle resulting from prior such targeting occurred 25 years ago last week outside of Waco, Texas. The federal Alcohol Tobacco and Firearms (ATF) agency saw the Branch Davidians — a fringe Protestant group that quickly became maligned as a cult — as the perfect patsies for a high-profile raid that would make G-men look like heroes.

Gun control advocates may shrug off ATF misconduct at Waco as a once-in-a-bureaucratic-lifetime fluke. Tell that to Mexicans – 150 of whom died because of the ATF’s Fast and Furious gun-running scheme that illegally sent thousands of firearms into Mexico during Obama’s presidency.

Gun owners fear a revival of 1990s federal enforcement efforts that endlessly vilified them. In a 1994 Supreme Court case, the Clinton administration argued that gun owners are the legal equivalent of drug dealers who should be presumed guilty. The Justice Department solemnly told the Court: “One would hardly be surprised to learn that owning a gun is not an innocent act.”

The case of Harold Staples vs. U.S. involved an AR-15 that the ATF had tampered with after seizing to convert it into an illegal automatic weapon. Justice Clarence Thomas, writing for the 7-2 court majority rebuke of the Clinton administration, declared, "The government's position, is precisely that 'guns in general' are dangerous items. (For) the Government ... the proposition that a defendant's knowledge that the item he possessed 'was a gun' is sufficient for a conviction." If the White House is occupied by someone who derides the Second Amendment, scores of millions of gun owners could be victimized by similar or worse toxic legal nonsense.

“Show us the gun and we’ll find a crime” crackdowns work out great for bureaucrats but ravage citizens and the Constitution. There are already sufficient laws on the books to disarm people who pose stark public threats, such as alleged Florida school shooter Nikolas Cruz. Sweeping gun bans multiply the number of criminals while doing little or nothing to reduce violence.

I recently saw a parallel at local government level. Kettering has some ordinances regulating "weapons" stores. Not specifically firearms, which I believe they were using as an end run around ORC 9.68. It appears to me that Kettering didn't want a gun store in town, so they used zoning and other restrictions to go right to edge of 9.68 violations. To make this seem legit, they pestered the martial arts places who sold knives, staffs, etc.

The gun shop owner closed his store and now just sets up at gun shows.
Quit worrying, hide your gun well, shut up, and CARRY that handgun!

At the meeting with congressmen last week, President Trump said:

We can [ban bump stocks] with an executive order. I’m going to write the bump stock; essentially, write it out. So you won’t have to worry about bump stock. Shortly, that will be gone. We can focus on other things.

So let me repeat: If Trump can ban anything which "accelerates the rate of fire of a semiautomatic" -- all in the name of banning bump stocks -- then he is ultimately imposing a far-reaching gun ban.

If you doubt this, please watch this video here.

Banning something which helps a shooter “accelerate” a gun’s rate of fire can then be used by a future anti-gun Democrat President to ban polished bolts, match triggers, magazines, tripods, and perhaps even AR-15's themselves -- if they have pistol grips which allow them to be fired faster and more accurately.

That's clear as a bell, isn't it? How hard is leadership? Tell the truth, stand on principle and refute false arguments.

This is where the idiotic rhetoric from people who don't understand the function or the mechanisms they're decrying meets reality.


Indeed, ATF has already ruled numerous times that bump fire stocks do not fall within the statutory definition of “machineguns.” Now, however, apparently responding to political pressure in the wake of the recent Las Vegas shooting, ATF seeks to reconsider its position on bump fire stocks — perhaps in order to regulate yet another area in which it has no authority

The ANPRM gives rise to the suspicion that ATF desires to “reclassify” bump fire stocks as machineguns, both in contravention of the statute and in derogation of ATF’s prior position on the issue. If that is, in fact, ATF’s intent, then such behavior is the sort hat one would expect from an authoritarian regime, not a society where the right to keep and bear arms “shall not be infringed.” Rather than operating within its limited statutory authority, ATF would be threatening the American gun owner — regulating devices that are clearly legal, and threatening those who possess them with prosecution, essentially adopting the former motto of the TSA — “dominate, intimidate, control.” This would not be the rule of aw; it would be lawlessness.Whether ATF chooses to undergo or forego a subsequent rulemaking on this issue, ATF should continue to stand by its constitutionally sound and legally correct conclusion that bump fire stocks are not machineguns under the statute, and thus cannot be regulated by the federal government.

Today the Department of Justice submitted to the Office of Management and Budget a notice of a proposed regulation to clarify that the definition of “machinegun” in the National Firearms Act and Gun Control Act includes bump stock type devices, and that federal law accordingly prohibits the possession, sale, or manufacture of such devices.

"President Trump is absolutely committed to ensuring the safety and security of every American and he has directed us to propose a regulation addressing bump stocks,” said Attorney General Jeff Sessions. “To that end, the Department of Justice has submitted to the Office of Management and Budget a notice of a proposed regulation to clarify that the National Firearms and Gun Control Act defines ‘machinegun’ to include bump stock type devices.”

This submission is a formal requirement of the regulatory review process. Once approved by the Office of Management and Budget, the Department of Justice will seek to publish this notice as expeditiously as possible.

In my opinion, this is one of the most serious threats to our 2nd Amendment rights in recent history. If a President can arbitrarily ban an item by changing its definition, the 2nd Amendment is over and a civil war will likely be the eventual result. Even in socialist New York, people did not abide by the Safe Act. The people of the flyover country USA definitely will not obey like the sheep in Australia. This is VERY serious and we need to be writing letters to our Congressmen and to the President to keep this ban from happening, I've already sent several emails to President Trump. I don't think he realizes the consequences of his actions and the implications when a future President takes office.
Mike
OFCC Member
Top 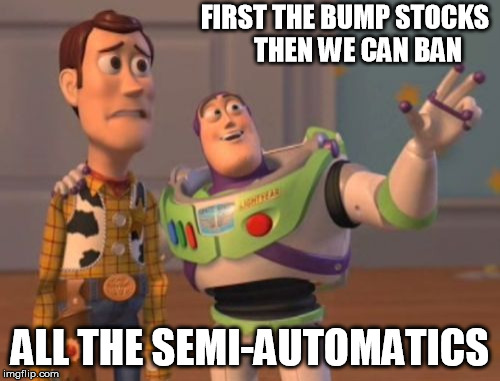 Tweed Ring: "...we should have all done more to elected Republicans..." Agreed
Top
Post Reply
8 posts • Page 1 of 1